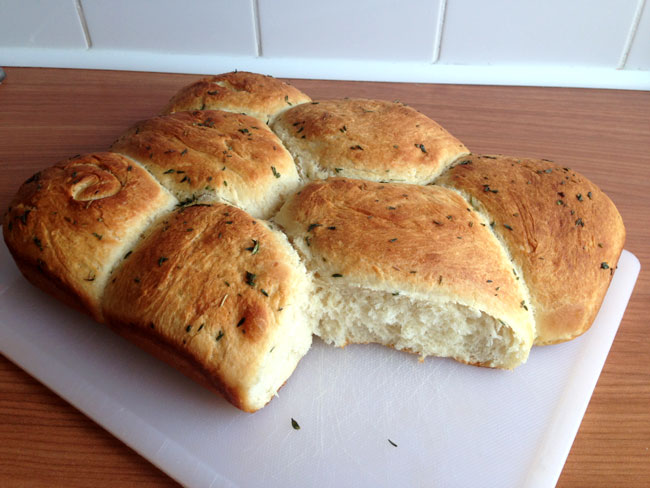 I’ve tried to make bread before, but it always turned out to be a disappointment. The taste was all right, but the structure not so much. You could throw it through a window! Recently I found a recipe for rosemary and garlic butter rolls on Pinterest, I gave it another try and this is the result!


I made a sweeter version (I didn’t have any fresh rosemary around and was too lazy to go to the store), but they turned out great. Very light and soft! Next time I will try it with rosemary and sea salt. 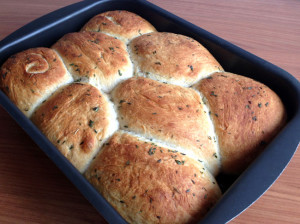 Directions
Start by adding the instant yeast to a bowl with the water. Stir and let the yeast sit there for a couple of minutes. Meanwhile, mix 2/3 of the butter with the milk and put it in the microwave for one minute (full power). While waiting you can lightly beat the egg in a separate bowl. When this is finished you can take out your mixer bowl and put in the sugar, salt, egg and 1 cup of flower. Also add the milk and butter mixture.

Mix until the flour is part of the mixture and add the next cup of flour. Wait again until everything is incorporated, add the last cup of flour and mix everything together again. Keep mixing until the dough forms a ball and take over with your hands (only necessary when using a hand mixer instead of a stand mixer). You should keep mixing for about 10 minutes in total. At first the dough can be really sticky, but you can keep adding bits of flour until it’s only slightly sticky.

While you are waiting you can (first wash the stickiness of your hands off course) lightly butter a large baking tray and spread some flour on your worktop. After the ten minutes you transfer the dough unto the worktop, flatten it with your hands and cut it in 9 or more pieces (depending on how large you want your rolls to be). Make balls out of the pieces and place them in the baking tray. Cover the tray with a towel and let the dough rise for about an hour and a half. They should double in size.

Again you can do something useful while you’re waiting. Take the butter you have left, melt it a bit in a microwave and add the honey and thyme. You can change the amounts to your liking of course. After the hour and a half you generously brush this mixture over the rolls.

Now bake them in a preheated oven at 350F/175C for about 20 minutes or until they are golden brown.